On 31st March 2022, Maersk Minder docked at Fitjar Mekanisk Verksted in Norway, ready for the installation of a battery: a container-based hybrid power system built by Wärtsila. At the same time Maersk chose to replace the existing mass flow meters with Coriolis mass flow meters from Yokogawa, supplied by Insatech Marine, as the original supplied Coriolis flow meters failed in operation in the demanding environment. Insatech Marine was chosen, since Insatech provides complete monitoring solutions which includes Yokogawa’s stabile Coriolis mass flow meters, which had shown its worth in other projects in the group.

Now fully fitted and functioning, the Wärtsila HY-system is expected to reduce the anchor handler’s fuel consumption – and thus carbon emissions – by 15%, as well as reducing the vessel’s maintenance needs and improving her operational performance.

The battery system is comprised of an energy storage system (ESS), comprised of 132 smaller batteries, and a
transformer, which is controlled and monitored via an energy management system (EMS). In addition, the Insatech Marine Fuel Consumption System consisting of a data collection unit and 10 × Coriolis mass flow meters from Yokogawa were used. This system ensures that the fuel consumption is monitored continuously and thereby, Maersk get insights into their consumption of fossil fuel, which makes it possible for them to improve their performance and reduce emissions, such as CO2.

One of the emissions-reducing advantages of the hybrid system is the facilitation of peak shaving, meaning the batteries can deliver extra power quickly to avoid spikes in power-consumption. This ultimately leads to a significant efficiency improvement, since the motors can run with optimal load and use the batteries to absorb a large part of the load fluctuations.

Having successfully completed her sea trials off the west coast of Norway, Maersk Minder is now believed to be the world’s first hybrid-electric anchor handler. 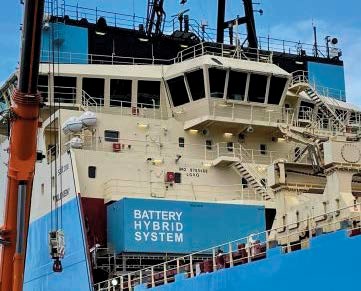 Check it out now