In the last decade, the use of Coriolis flow meters has been changing from general purpose to supporting your needs in specific applications. A coriolis flow meter is based on the Coriolis effect and the coriolis mass flow measurement is applicable especially useful in the marine industry to measure the amount of marine fuel oil received during bunkering.

Use this flowmeter for your application with low flow. A small dual bent tube Coriolis flowmeter series for highly accurate measurement at lowest flows.

Use this flowmeter for your applications with medium flow. It's a Coriolis flowmeter with superior performance under demanding conditions.

Use this flowmeter for your apllications with high flow. ROTAMASS Giga deliver best in class accuracy and most flexible installation at high flow rates.

What is the Coriolis Effect

To illustrate the Coriolis effect consider earth. Now imagine yourself standing on the equator looking up to the sky at a stationary cloud. At the equator the rotational speed at the surface of earth is approximately 1600 km/h. We will assume the cloud has the equivalent speed. Due to high – and low pressures the cloud moves north to the latitude 45°. Here the rotational speed of the surface is “only” approximately. 1100km/t, hence we have a rotational difference of 500km/h in comparison to the equator. If we ignore frictional loss the cloud still moves at the speed of 1600km/h and it therefore rotates faster than the earth. If the cloud drifted further up to the North Pole, the surface speed would be zero and thus there would be a 1600km/h speed difference between the surface of the earth and the cloud. We would say that the cloud moved relative to the surface of the earth.

Weather systems generated at the equator drifting north will, due to the Coriolis effect move east and in reverse in the southern hemisphere they move west. Summing it up, the Coriolis Effect is caused by the change in peripheral speed (angular velocity).

A mass m moving from the center to the periphery on a rotating circular plane will move along the path B. If the mass m is passed through a tube fastened on each side, this tube will bend as a result of the force of the Coriolis effect. This force is what we use when measuring mass flow.

The Coriolis mass flow meter measures the mass flow by letting the medium run through two curved measuring tubes which will oscillate back and forth at a frequency of e.g. 150Hz. Looking at the tubes from the side when the medium passes through one will see a movement equal to that of the cloud drifting from equator and south, and vice versa at the other end of the tube.

When a medium runs through the tubes (which will excite/move back and forth) the mass of the medium will resist being accelerated into circumference/angular velocity in its way into the tube. Likewise it will resist when the medium is decelerated on its way out of the tubes. The picture (below) shows the measuring tubes being excited back and forth without flow. Notice how the tubes are parallel at no flow conditions.

The picture (below ) shows the same situation as above, the difference being this one illustrates a flow through the tubes. Notice how the tubes are twisted at the corners when they move from side to side. It is due to the mass resisting the acceleration and deceleration going in and out of the tube. 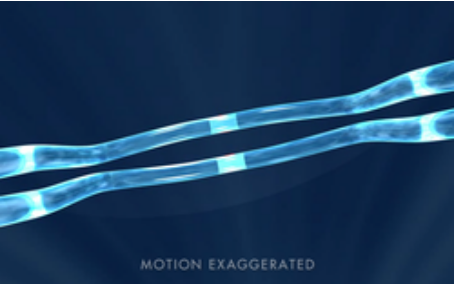 By placing two pick-up coils (at each tube mouth), it is possible to measure how much they twist related to one another. It means it is the phase shift between “in” and “out” of the tube and this value is directly proportional with the mass flow. By measuring the frequency of the resonance, the result of tube vibrations, we can get a very precise measure of density. It is only possible to measure density of fluids.

The Coriolis Mass Flow Meter and Its Usage

The Coriolis Mass Flow measurement is applicable in different industries and is especially useful in the marine industry to measure the amount of marine fuel oil received during bunkering. The reason for this is that the amount of marine oil is often measured in volume but settled in mass. During the translation from volume to mass different uncertainties are introduced making the calculation less precise. Furthermore the volume can be manipulated, for example by introducing air or delivering the oil at a higher temperature than stated on the bunker delivery note. Essentially this means that the volume increases but the mass of the oil decreases. These uncertainties or direct manipulation have consequences; the actual amount of bunked fuel the buyer receives may be less than contracted and could mean the buyer receives up to 4% less marine fuel oil. This discrepancy between actual received marine fuel and the contracted may amount to 1.000s of dollar in losses per bunkering.
This adverse effect can however be mitigated using the Coriolis mass flow measurement. The reason that Coriolis mass flow meters are more precise than traditional volumetric based measurements is because they are not affected by change in the marine oil characteristics such as temperature, viscosity, pressure, conductivity and gravity, and thus provides a superior type of measuring. Hence it has the potential to save a lot of money for each bunkering as quantity is measured directly.

If you are interested in what a Coriolis flow meter can do for your bunkering operation, read more about The Bunker Management System, and make sure you get the amount of fuel you paid for.

You can also watch the video below explaining the pricipal operation of the Yokogawa coriolis mass flow meter.

Back to product overview

Webinar - The most accurate and reliable fuel measurement sensor